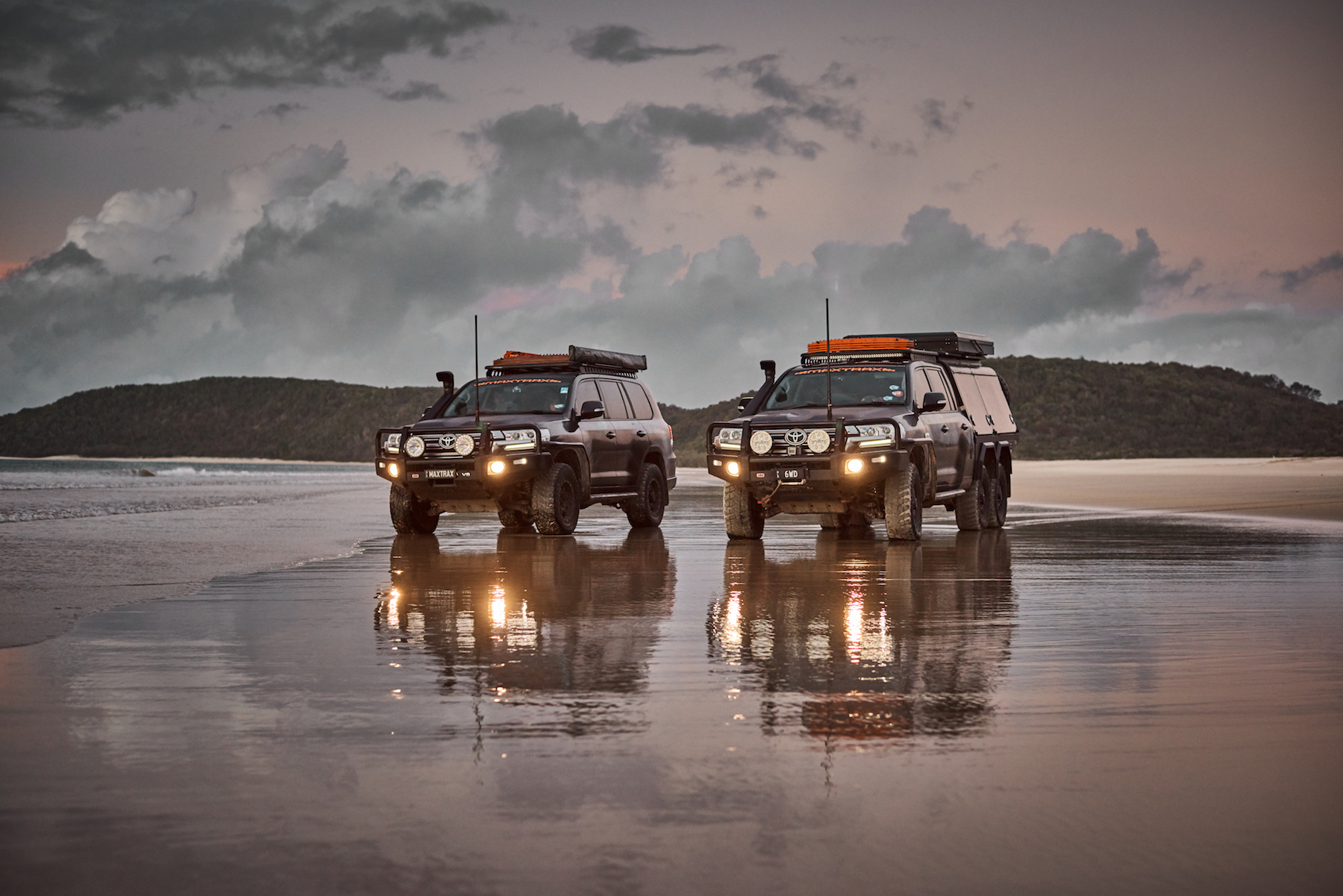 There’s few who know Fraser Island better than the inventor of MAXTRAX, Brad McCarthy—he literally wrote the Dirty Weekends guidebook to exploring the island, so it’s no coincidence that the 4WD paradise is the spiritual home of MAXTRAX.  The 75-mile long sand island sits off the coast of Queensland, a few hours north of Brisbane, and there isn’t a single foot of pavement on the entire island. If you want to explore here—you’re going to need 4WD, and eventually you’re going to get stuck in the island’s infamously soft sand. Aside from areas shut down for conservation on the island’s Western beaches, you can drive from the very southernmost point all the way around the northernmost point at Sandy Cape, all the way up the east coast—and you can check out the island’s rainforest center on the sandy interior tracks that often lead to pristine freshwater lakes. 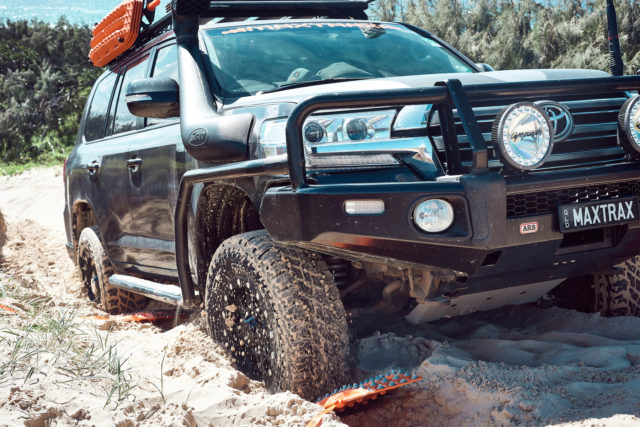 As you might know, we’ve been busy tweaking, validating and proving the the brand-new MAXTRAX Xtreme—the ultimate traction board with replaceable metal teeth. Aside from getting in some beach time over a weekend when the US team was in town, this trip to Fraser Island was dedicated to putting the Xtreme through extreme situations in an effort to get the product to fail. It’s important that a MAXTRAX product is 100% validated before it hits the market, and that’s why we test our new products in the environments where they’re actually going to be used, and by the time the Xtreme hits the market later this year, it’ll have done multiple Simpson Desert crossings, tackled the Kimberley, taken on a slice of the Canning Stock Route, and have been beaten up on our local beaches to make sure it’s the best it can be.

We’re huge cruiser fans, and pretty much all our testing is done from behind the wheel of a Landcruiser. We’ve built a bit of a reputation in Australia for being a company that takes it to the next level with our trips and our trucks (we’re not a stranger to bringing out the chainsaws to get to places people haven’t been in a few decades). For this Fraser Island adventure, we busted out the entire fleet, including our absolutely-insane 6WD turbo-diesel V8 200 series, our 4WD 200 series, and Ben’s 76 coil-sprung converted 76 series.

The 6WD is one of the most-unique trucks in Australia, built by Brad for extreme long distance desert touring in places where there are no tracks. It’s surprisingly nimble for such a long vehicle, and it’s almost like cheating when the tracks get soft. I keep telling Brad that he’s a guy who’s really, really tired of getting stuck. 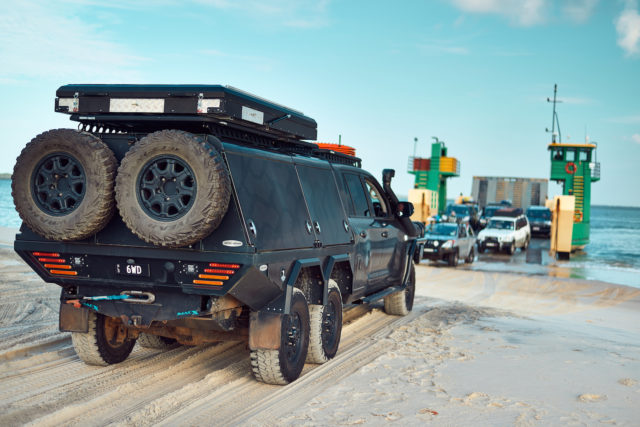 There’s no bridge connecting Fraser to mainland Australia, so you’ll need to get a barge or ferry to the island, our team likes to use the barge at Inskip Point, which is not only the shortest crossing, but also the most flexible. Just buy your ticket and show up when you’re ready to cross. 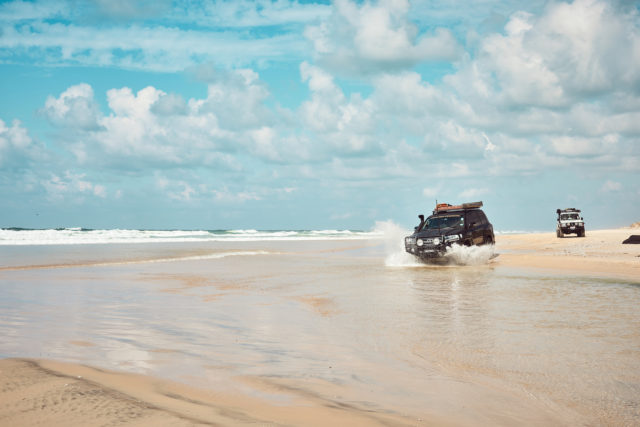 Soft sand aside, it’s the tides that are most likely to get you stuck. There’s about a dozen points on the island where depending on the level of the water, you’re going to have to wait to get through. 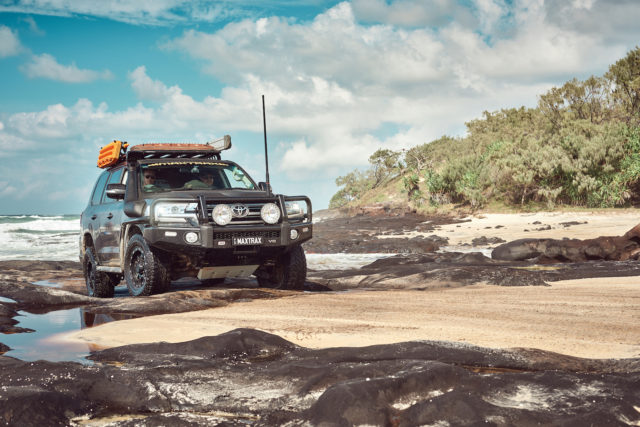 This black rock is called “coffee rock” and it’s essentially prehistoric compacted sand from the bottom of lake beds when the ocean’s water level was lower. 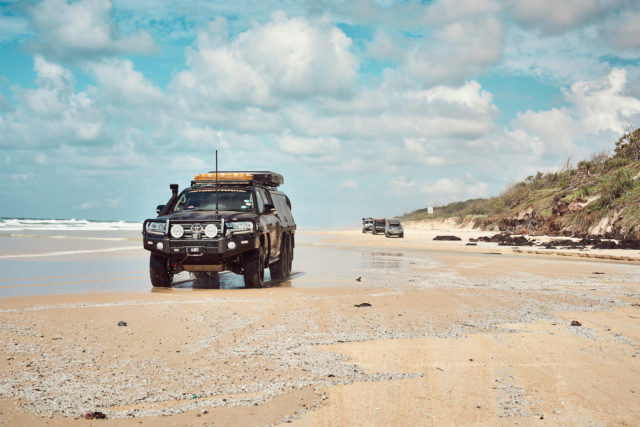 See that grey stuff ontop of the beach? It’s rock from underwater volcanos near Vanuatu. 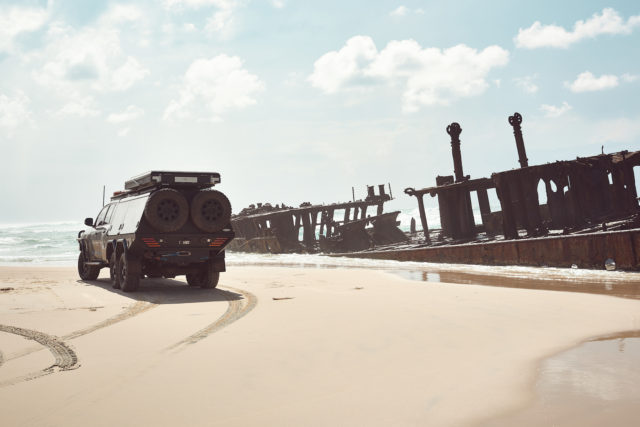 The S.S. Maheno is a slowly degrading and rusting shipwreck on Fraser Island 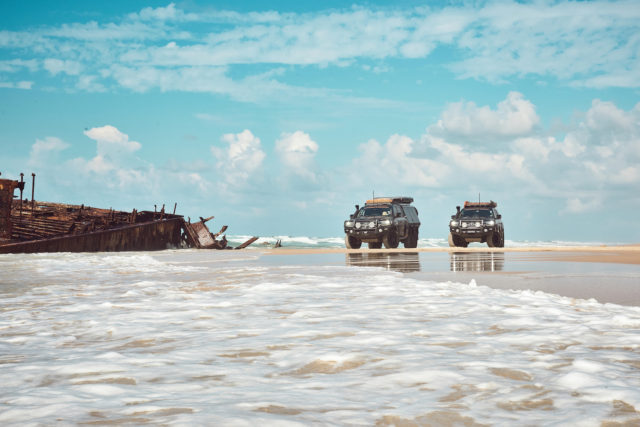 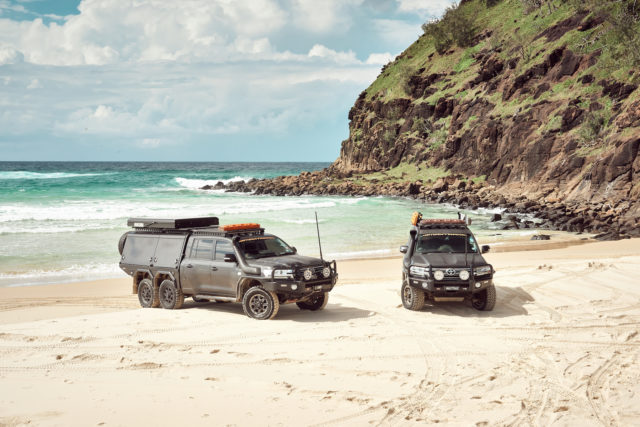 Indian Head is one of the few places where you’ll need to head inland to continue driving on the beach. 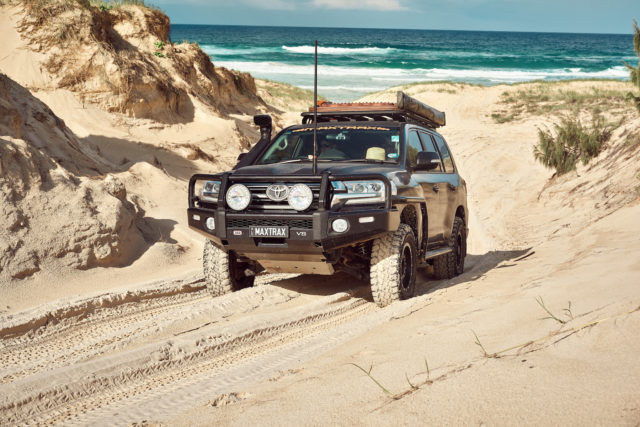 Since there’s no tide to compact the sand, these bypasses can be incredibly soft as they get chewed up traffic. 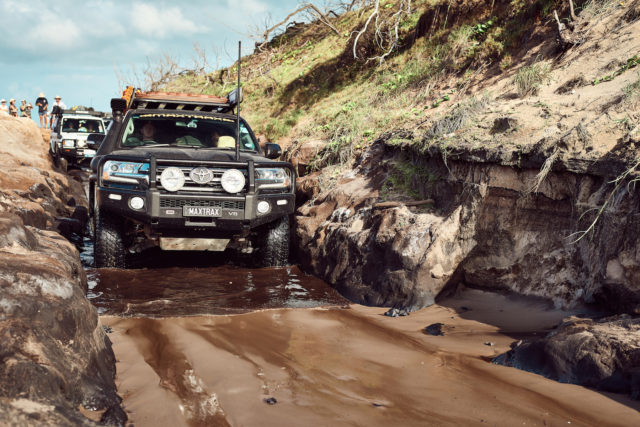 Ngala Rocks is the most-infamous bypass, as it’s only passable during low tide, and it’s the only way north to Sandy Cape (the northernmost point of Fraser Island). 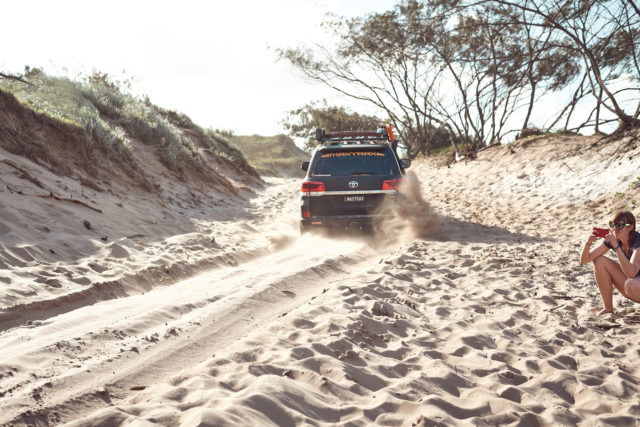 Plenty of throttle, and a set or two of MAXTRAX to back you up is the only way to get through. 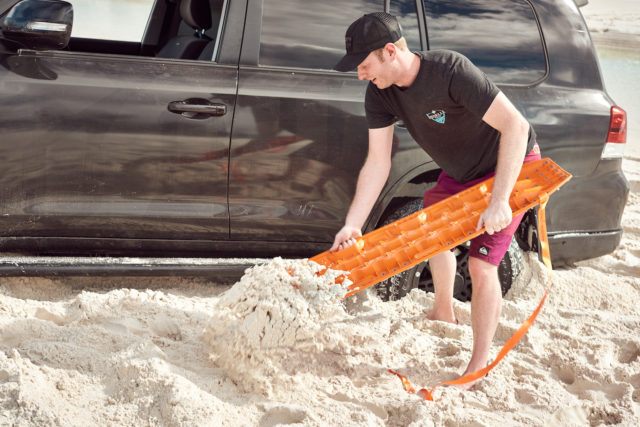 Unfortunately, yours truly had to break out the MAXTRAX as he was a little shy with the skinny pedal on the Brad’s 200 series. 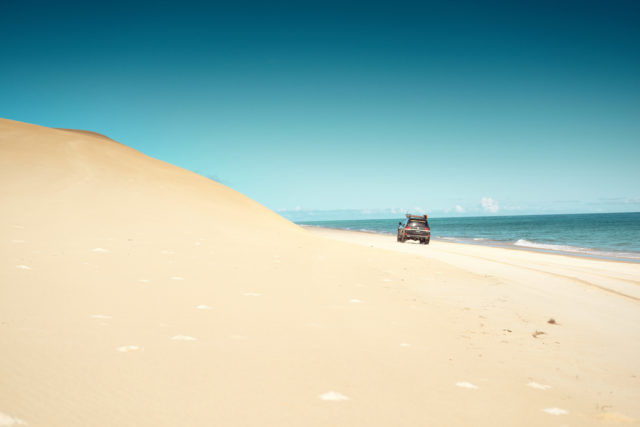 But there’s no doubting that waiting for the tides and getting stuck in the sand is worth it when you get to the dunes near Sandy Cape. 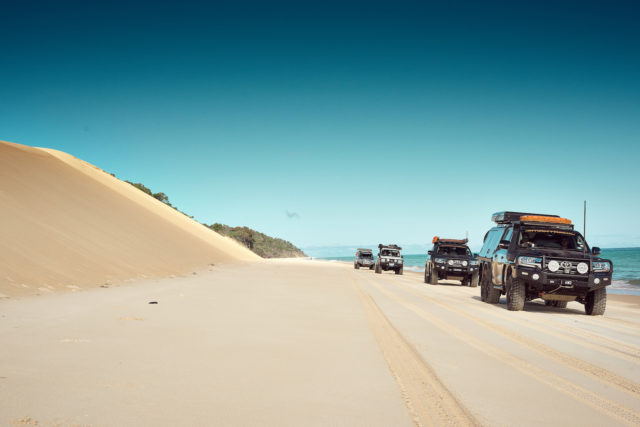 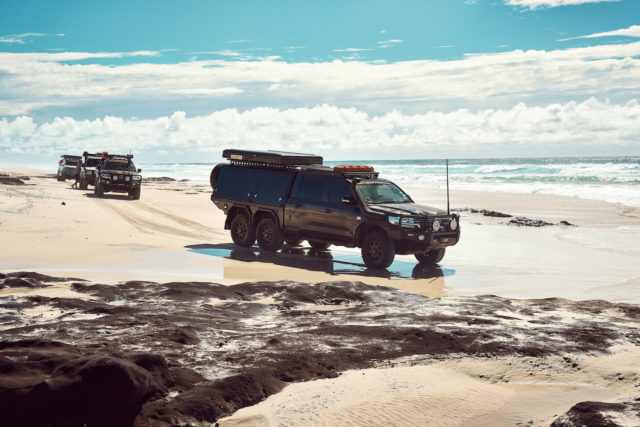 After camping at Sandy Cape, unusually high tides weren’t exactly in our favor for the North Ngala Rocks, which you can usually drive through without issue, so we had to take a seldom-used bypass track. 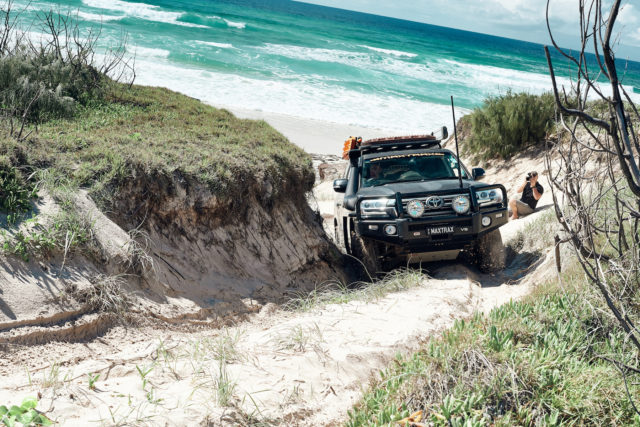 We used the 200-series to break the track, which took a few runs, again because yours truly didn’t want to break the boss-man’s truck. 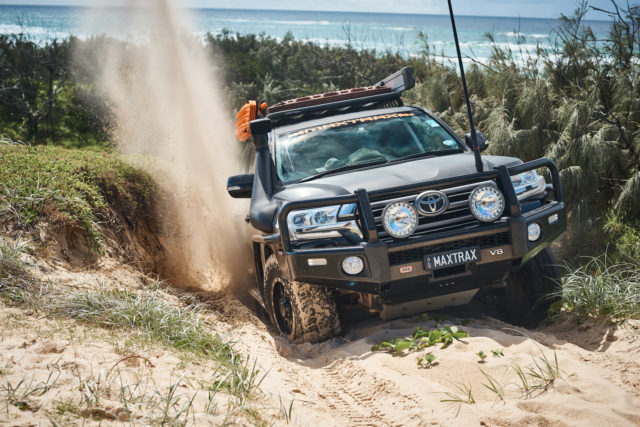 Oh shucks, I’m stuck again. To be fair, it was way steeper than it looks in this photo, and we were the first to go through in quite a while. 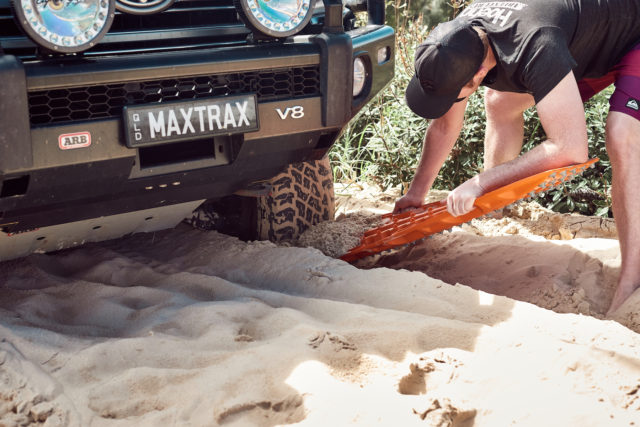 Lucky it gave us some additional time to test the new MAXTRAX Xtreme. These are pre-production boards.

With the replaceable metal teeth of the Xtreme, you can be a bit more aggressive on the throttle, which is perfect for situations like this where you’re stuck in soft sand on a steep incline. 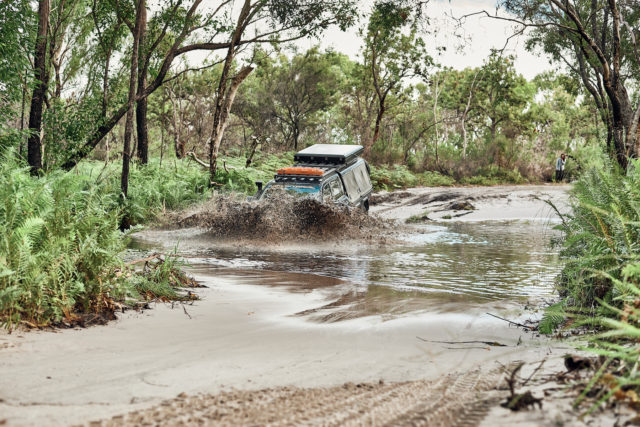 The interior tracks are often overlooked, but they present some unique challenges with plenty of freshwater crossings. 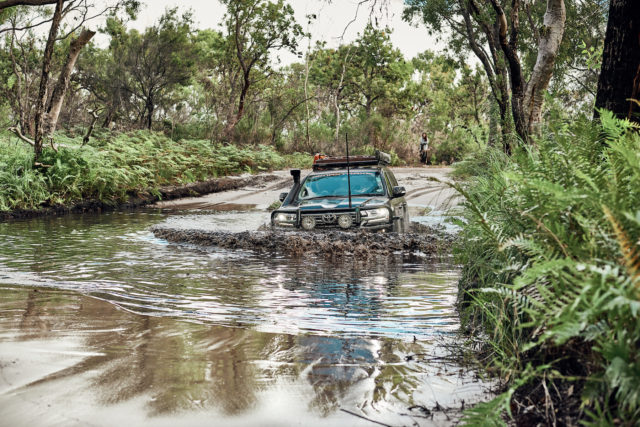 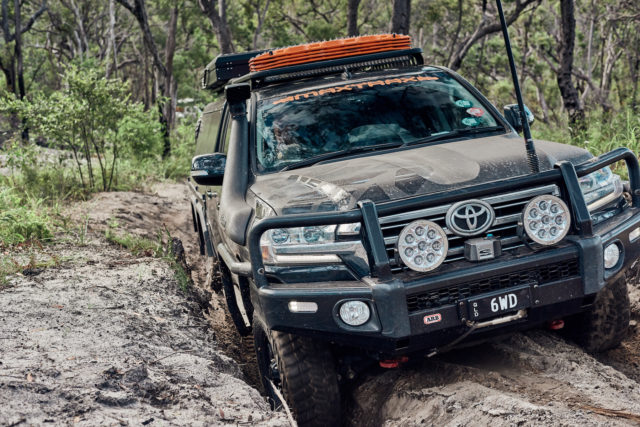 I decided to take the wheel of the 6WD for the interior tracks, and once the 6WD engages and the twin-turbos spool up, it’s like hitting the easy button. 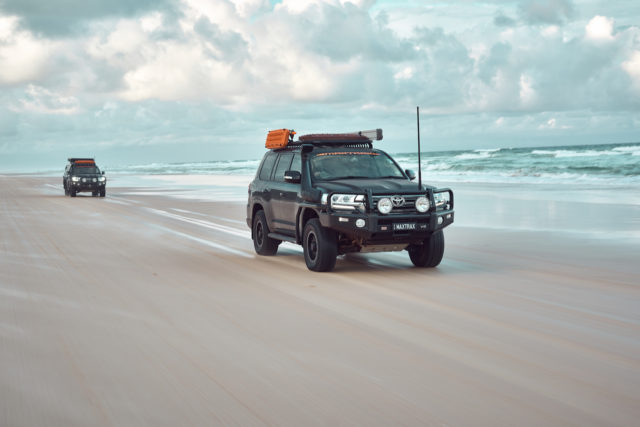 We were rushing to the last ferry, with such beautiful beaches mixed with four-wheeling, who wouldn’t want to stay until the last second? 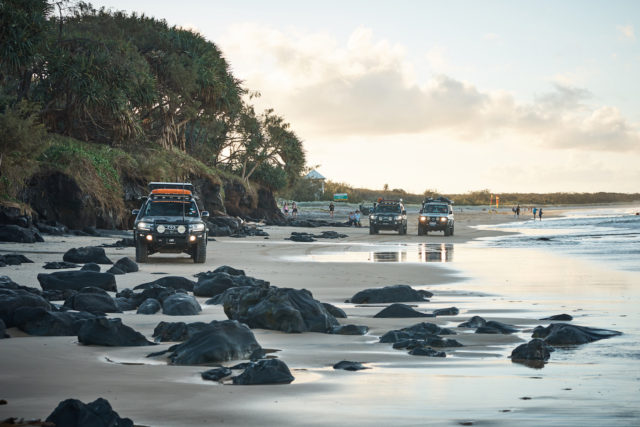 After we took the Inskip Barge back to the mainland, we decided that we weren’t finished, so we decided to continue heading south on Rainbow Beach towards Double Island Point. The tides just allowed us to get through the coffee rock at Rainbow, which is one of the most-common places you see people with drowned 4X4s in Australia. 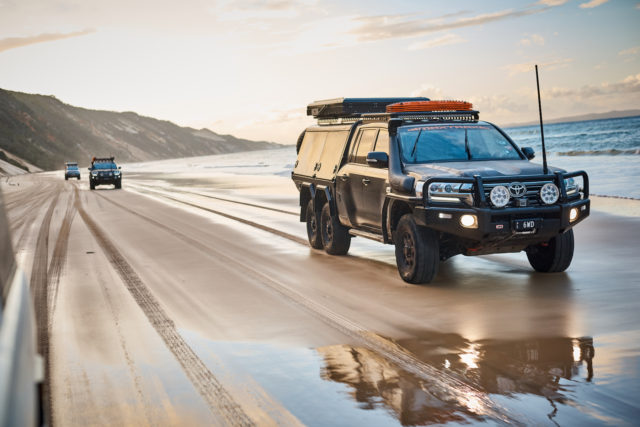 You can just make out the colored sands in the background. 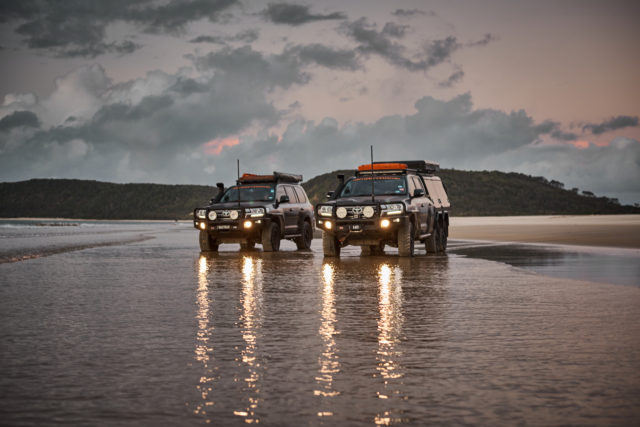 With over 300 miles of sand driving in 4 days, we were rewarded with beautiful light and an epic sunset.

Have any questions about Fraser Island? We’d be happy to help—shoot us an email (matt@maxtrax.com.au) or send us a message on Instagram (@MAXTRAXHQ).